Welcome to Homer Community Consolidated School District 33C, home of the Mustangs. We are a highly progressive grade school district that works hard to ensure students are Future Ready and empowered for success in a dynamic world.

Homer 33C is nestled in the upscale community of Homer Glen, a “suburban gem” offering a unique blend of open space, beautiful residential developments and vibrant commercial corridors with significant commercial growth potential. Located just 25 miles southwest of downtown Chicago, Homer Glen is strategically positioned in one of Will County’s largest municipalities and offers residents the unique blend of a rural setting with the convenience of locally-owned businesses and nationally recognized chain stores as well as a close proximity to big-city entertainment. Much of Homer Glen’s 22 square miles is composed of vast, scenic wooded lots with growing subdivisions and businesses to accommodate a thriving community. It was listed as one of the Safest Cities in Illinois by SafeWise in 2017, making it an ideal environment for families to raise their children and enjoy the strong educational programs of Homer 33C. 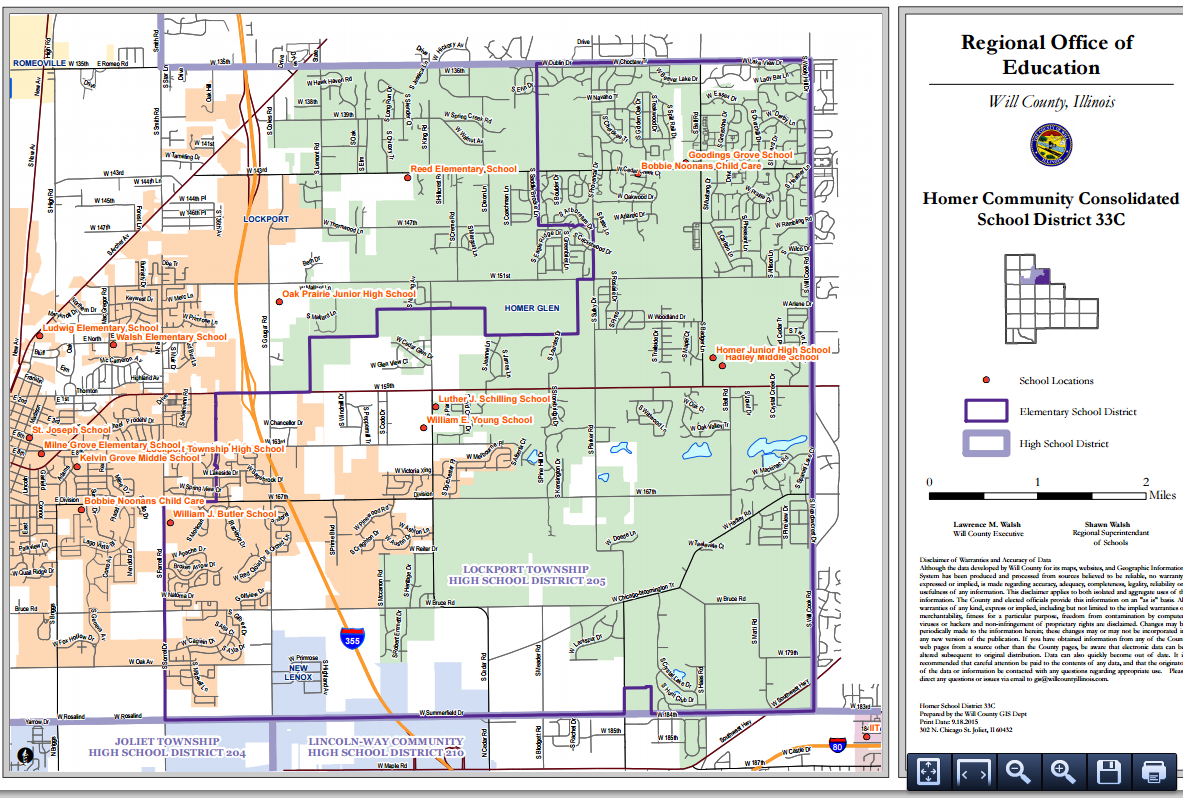 Homer’s roots run deep. It was one of the first townships to be settled in what’s known today as Will County. Early settlers were drawn to the area in the early 1800s by the vast lands of timber. They would clear the land for farming and use the timber to build their houses, barns and fences. Homer Township was named by one of those early settlers -- Alanson Granger -- in honor of his native home of Homer, New York. In 1832 and 1833, two villages formed in the Township -- Goodings Grove and Hadley. The villages thrived for nearly a half century, but became ghost towns when the railroad was built several miles south of Hadley in the 1890s. Today, we have two schools named after those early towns -- Goodings Grove School on 143rd Street and Hadley Middle School on Bell Road.

While our roots run deep, our names do not. The Village of Homer Glen was incorporated in 2001 and Homer CCSD 33C was established in 1956 with the consolidation of six rural one-room schools. One of those schoolhouses, Ross School, still stands at the entrance to our middle school/junior high school campus on Bell Road. Today, our district serves the communities of Homer Glen and Lockport. We currently enroll more than 3,600 elementary-age students (Early Childhood through 8th grade) in a 26.2-square-mile area. Our students go on to attend Lockport Township High School District 205.

Homer 33C was established in 1956 with the consolidation of six rural one-room schools -- Lauffer, Hadley, Ross, Wells Corner, Goodings Grove and Barnett schools. One of those schools, Ross School, now stands at the entrance to our middle school/junior high school campus on Bell Road. It was moved there in 1997 by a group of civic-minded individuals (the Homer Township Educational Foundation) who raised about $40,000 to relocate the school from its original site on 159th Street. The group also furnished the school with antique desks, recreating what it may have looked like in the late 1800s. In recent years, the one-room schoolhouse has been used for classroom visits and live history lessons.

The school’s last teacher, Evlyn DePra, recalled in a 1998 newspaper article how she would arrive early each morning to start a fire in the wood stove and put a kettle on for the lunches that students would bring with them in mason jars. When the weather turned harsh in the winter, she would have the youngest children sit on a step ladder to get warm because that’s where the heat of the stove rose first. The school closed in 1956 after educating multiple generations of students dating back to the 1850s.

Found in the District archives were the following tidbits of information regarding the early years:

When Homer Community Consolidated School District 33C was formed in 1956, the District built a new school (now known as Schilling School) with a large meeting room, which was used for community events and physical education classes as well as a lunchroom and library. Enrollment that first year was around 80 students. It quickly grew, however, and before long the large meeting room was converted into four additional classrooms.

In 1960, the community passed a referendum to construct an addition onto the school. The addition was designed to accommodate six additional classrooms. However, when the space was not immediately filled with students, the Board of Education suffered much criticism. Many residents voiced their displeasure, charging the District with wasting taxpayer dollars because only two of the six additional classrooms were actually required through 1965 (when the district numbered 299 students). But then, the growth started up again and the criticism soon disappeared when it became evident the addition had been a timely venture that ended up saving the District money in the long run.

It was during this time that the District hired its first full-time Superintendent -- William Tweedy, who served from 1964 to 1965. He was succeeded by Luther J. Schilling (for whom Schilling School is named). He guided the District through a period of high growth. When Schilling took the reins in 1966, the District was still fairly small and only employed 11 teachers and five non-certified staff members -- a custodian and four bus drivers. When he retired in 1986, the District had grown to accommodate 2,308 students.

During those years, Schilling oversaw multiple expansion projects and the construction of Goodings Grove School, which opened in 1979, and Homer Junior High, which opened in 1981. The growth was so rapid that from time-to-time, the District was forced to use supply rooms, kitchens and storage spaces for instruction while the additions and new schools were being planned and built. There was even a time in the ‘70s that the District had to rent vacant school buildings in Orland Park and Mokena to meet the surge in population. Newcomers criticized the District for not having the foresight to construct enough buildings to handle the influx of students. However, Homer 33C had utilized every bit of its bonding power in building previous buildings and was powerless by law to construct more facilities.

Throughout the high-growth period, Homer 33C was able to operate year-by-year in the black. The board, community and administration were extremely conservative in their spending habits, providing one of the finest, high-achieving academic programs in the state of Illinois while operating at one of the lowest per-pupil costs in the state.

Schilling retired from the Superintendent’s post in 1986. He was succeeded by Ed Karns, who guided the District for the next 14 years. During that time, the District grew from 2,308 students in 1986 to 2,827 in 2000. Voters approved (on second attempt) a referendum to build Hadley Middle School, which opened in 1988, along with an adjoining administration center. The administration center was an unexpected bonus that came about when contractor bids came in lower than expected on the school.

In 1999, Karns went back to voters and asked to issue $1 million in building bonds to help pay for another school -- this time in Lockport. That school, later named Butler, opened in 2001 -- a year after Karns retired. The measure passed 1,701 votes to 830, mainly because the Illinois Capital Development Board had agreed to chip in $2.7 million toward the project.

In 2000, William E. Young succeeded Karns as superintendent. He served students and the community until his retirement in 2008. During those eight years, the District continued to experience growing pains. In 2001, voters were asked to approve an increase in the District’s educational tax rate. The measure failed. A second attempt in 2002 was successful, however, and voters agreed to raise the District’s educational tax rate 70 cents per $100 Equalized Assessed Valuation to avoid teacher layoffs, the elimination of some classes and the loss of extracurricular programs and athletic programs.

In 2008, Young retired and J. Michel Morrow was selected to serve as the District’s fifth superintendent. Under his leadership, the District built its sixth school -- Young School on Cedar Road. The school opened in 2010 and was built with existing district funds and debt certificates that did not increase the District’s tax rate. The decision was somewhat controversial at the time because voters had rejected two building bond referenda in 2007 and 2008.

Also under Morrow’s leadership, the District completed a $10 million makeover at Schilling School. The makeover included a new wing of 16 classrooms in a circular design around a courtyard. The addition enabled the District to demolish an aging section of the school at the same time.

After Morrow’s retirement in 2014, the District hired its first female superintendent -- Dr. Kara Coglianese, whose expertise in 21st century instructional methodology, strong understanding of fiscal responsibility and ability to lead with vision has taken Homer 33C in a new, exciting direction. She has intensified the District’s efforts to prepare students for the 21st century, introducing a full-day kindergarten program and educational tools to build their critical thinking skills, expand their communication skills and become independent problem solvers. In 2015, the District installed STEAM labs at Homer Junior High and Hadley Middle School and began teaching keyboarding to every third grader. It’s all part of the District’s new initiative, Preparing Future Ready Students.

Homer Community Consolidated School District 33C has been guided by seven superintendents during its 60 years of existence. They are:

Other district facilities include an Administration Center on Bell Road and six schools. They are:

Our students begin working with technology at an early age. We are a Future Ready School District, meaning our students use 21st century tools (including Chromebooks, laptops, PCs and iPads) to help them learn and understand how to collaborate and build projects together. We begin by teaching keyboarding to our third graders. In the fourth grade, students are given Chromebooks to use throughout the day.

Our goal is to make sure our students are college and career ready by the time they graduate, possessing the advanced tech skills and critical thinking skills that will help them get ahead in life. That means enabling them to start developing the coding, research and communication skills needed for the 21st century. To help propel that initiative, we added STEAM (Science, Technology, Engineering, Art and Math) labs at Hadley Middle School and Homer Junior High School where students work with Chromebooks, iPads and Google apps to develop their 21st century skills in:

Homer Community Consolidated School District 33C students continue to perform well on state achievement exams, scoring significantly higher than the state average. According to the most recent Partnership for Assessment of Readiness for College and Careers scores (PARCC), 59 percent of our students meet or exceed expectations -- 22 percentage points higher than the state average of 37 percent. 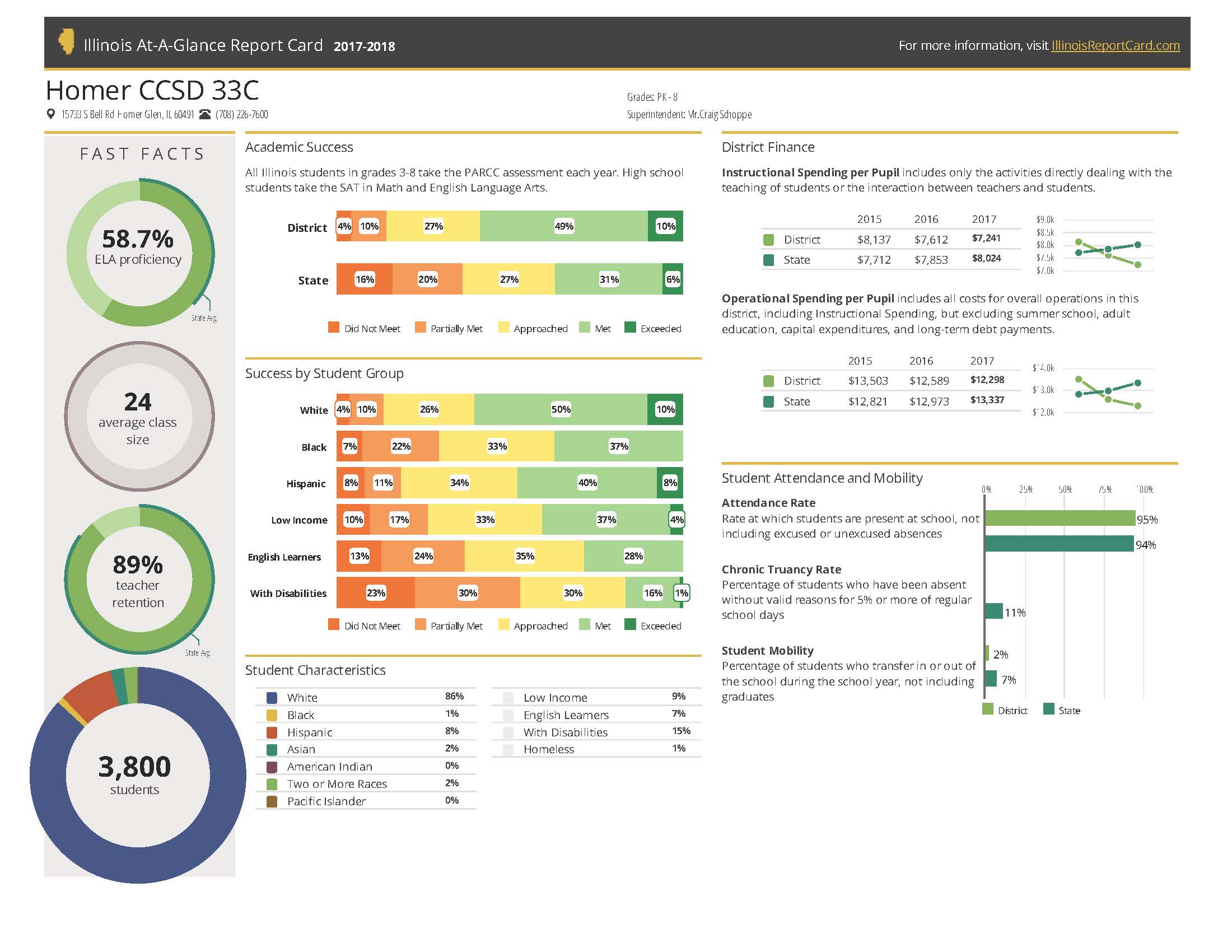 Homer CCSD 33C is proud to be a part of a community that values education, its children and its future. We are fortunate to have a strong group of parent volunteers at each school who work tirelessly through our Parent Teacher Organizations (PTO) to support our students, teachers and staff. In addition, Homer 33C recently formed a charitable foundation that will reach out to business and community leaders to help generate further enrichment opportunities for our students.